Mark Pougatch is ITV’s Chief Sports presenter, anchoring their coverage of Football’s World Cup and European Championship, the FA Cup and Rugby Union’s World Cup and Six Nations. In this role, he regularly broadcasts to tens of millions of domestic viewers. He will be based in Qatar for this winter’s FIFA World Cup.

He presents The Weekend Review on behalf of Premier League Productions, a global programme showcasing the best of that weekend’s Premier League football which is seen by an equal number of viewers around the world.

Mark is also the touchline presenter for Stan Sport Australia’s coverage of the UEFA Champions League and autumn Rugby Union internationals. In his role in the Champions League, he’s the key man for Stan’s coverage bringing the news and colour from all the major matches and stadia as he travels around Europe. 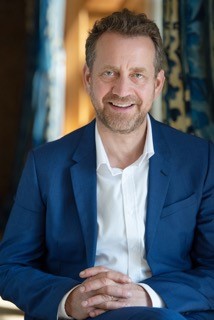 Mark is a director and co-owner of Fever Media, a production company which specialises in commercial and longer-form content. Their first documentary, Croatia: Defining A Nation, was recently released on the new FIFA Plus site. Fever have also produced HD Cutz, a lifestyle entertainment programme for FIFA featuring several leading football like Paul Pogba and Toni Rudiger, and they also do commercial work for Chelsea FC.

For sixteen years Mark presented ‘5 Live Sport’ and ‘Sports Report’ on a Saturday afternoon on BBC Radio 5 Live. In that role, he presented from every major sporting event in the world – The Olympic Games; World Cups in Football, Rugby and Cricket; The Ashes; The Ryder Cup; The Commonwealth Games; World Heavyweight Boxing; The Grand National; The Six Nations and in football – the Champions League, the FA Cup and the Premier League. He holds the distinction of being the longest serving presenter in the history of ‘Sports Report’ – the oldest sports radio programme in the world. In 2011 he was named Sports Presenter of the Year by the Sports Journalists Association.

Mark’s other television work includes regular appearances as a guest and panellist on ‘Countdown’ and ‘The Chase’. In the latter Mark won over £100,000 towards his team claiming a charity prize of £120,000.

Mark has written for The Times and is the author of ‘Three Lions Versus The World’, a history of England in the World Cup.

Mark’s podcast work includes hosting the BBC Football Daily; the ITV Football Football show during Euro 2020; the Daily Mail’s Game on series, and from Auddy, a six-part series ‘Inside The Tour’, the story of England’s 1986-7 Ashes triumph in Australia.

Mark is a brilliant compere and host at corporate events. Some of his past work includes hosting an evening with Jose Mourinho on behalf of Hublot; an interview with Jose Mourinho for Audi; the Hollis Sponsorship Awards; the Variety Club Sunshine Awards and many other charity nights and quizzes.

In 2021 Mark was named as Sports Presenter of the Year in the Broadcast Awards.

Mark has the knowledge, experience, gravitas and authority to go with a sense of humour, and the work ethic needed to make any programme he’s involved with a huge success. Anybody who has worked with him over the past thirty years will readily attest to that.

Mark presents the Champions League throughout 2022/2023 for Stan Sports Australia as well as presenting his own show on Premier League Tv on Sunday evenings.

Mark is currently hosting ITV’s coverage of the World Cup in Qatar until 18th December 2022.